Diana was one of the very few unlucky adoptions that gets returned to the Sanctuary by the initial adopter.  Apparently she was so scared she didn't come out from under the couch and the bed.  We really can't understand why as she is the sweetest friendliest little girl.
She was adopted once more, and the same thing happened and she came back to us again.

We were going to hold back on adopting Diana again given that she was already returned twice, but then a lovely couple wanted to adopt her. They knew of her history and that made them more adamant that they wanted her.
The first night was a success. They were waiting for her to hide under the couch or bed but instead she jumped up and slept on the bed with them and their other dog.
Thanks Jesi and Veronica for giving Diana another chance at having her own family.  We guess she just needed to find her people 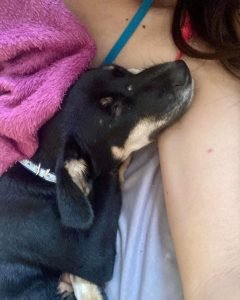 Let us tell you a story about little Dita, the little puppy who'll be with us at Robinsons this Sunday. Little Dita is the only

We're delighted to announce that once again we'll be at Robinsons Dumaguete this Sunday, August 21st, from 10am - 4pm. As always, we'll have puppies

Here is our handsome Olaf today. He was a perfect gentleman for all of 5 seconds! 🤣 If you'd like to know more about Olaf

Little Pepper has found the perfect Foster home where he'll be able to rest and recuperate. Thank you so much Marmel and Lloyd.

Danielle is leaving the Philippines and it's no surprise she's taking her beloved rescue cat with her. If you can help with the transport please