Fria has now settled into life in the general population as she is out of the puppy run. She is like a little live wire and doesn't stop running around and playing. She plays mostly with Corrie and Lara the two black puppies that were in quarantine with her. Unfortunately for Fria (but lucky for us and them) Corrie and Lara were just adopted together by a foreigner who owns a resort here.

Fria has been with these two constantly since November / December last year but she is so sociable we are sure she will be ok.

We have started leash training her - one of our volunteers Jonathan took her out yesterday but she refused to move from the Shelter. He had to carry her to the end of the walk and then she walked very hurriedly back!
We are still hoping we can find a good home for her especially given her tragic start in life.  She really is the sweetest little girl, jumping over visitors and licking them. 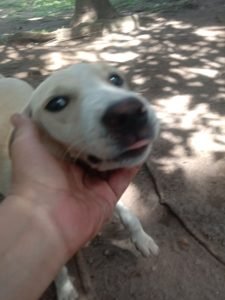 She has developed a bit of a fungal infection over the last couple of weeks which is very common at the shelter. It affects their fur - we now have to bath her 3 times a week with Mycocide shampoo to get rid of it.