On 20 March 2022, w bought in a puppy showing signs of distemper. She was spotted by Marites and bought in by Miles, both long-time supporters of DAS, who will drop whatever they are doing to rescue an animal in distress. After assessment at the Sanctuary, Faith and her family agreed to take her in, with vetinary support from us.
Faith's daughter Ella named her Hygieia, Greek goddess of health, and thanks to them all, little Hygieia had a chance. 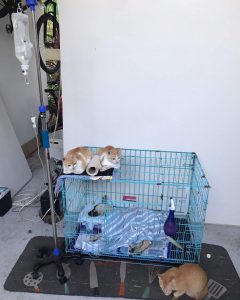 Under the care of the family and our veterinary assistants Rudylyn and Jerome, her twitching subsided, and her appetite grew. She was weak but was not crying or in any obvious further distress. We managed to source a Distemper antibody called Canglob D from Cebu, and with some kind donations, and yet another of our supporters Blake, we managed to get it flown over. We hoped the Canglob D would help her build a stronger immune response against the virus. Sadly, it was all just too late. Ideally the Canglob D injections should be done before neurological symptoms were present but we wanted to try everything we could. During the night of 24 March, she started having full body seizures, a sign that the virus was attacking her brain. She continued to have seizures throughout the night and by the following morning they were non-stop, her body was becoming stiff and it was clear to us that it was time to let her go, so we put her to sleep on Friday 25 March 2022.

She was surrounded by love for the last week of her life. Faith, Ella, Christian and the cats were with her round the clock, staying with her through the nights, talking to her, stroking her and willing her to survive. It just wasn't to be.

We want to thank everyone who tried to help this little girl - those who donated, Marites who was feeding her on the street, Miles for going to pick her up and bring her to DAS, Blake for flying over from Cebu with the meds, and of course Faith and family who did so much for her (and also for refusing to take the money we gave them to look after her.)

Run free Little one, I hope you know we all loved you and did our very best to save you