You are here: Home / OUR RESCUES / OUR DOGS / BRUCE

He spends most of his time outside the Caretakers house and the kitchen area.

He was probably 10 - 12 years old when we picked him up, and is one of the "Grandfathers" of the Sanctuary.  Although still wary of strangers, although he accepts some petting now! 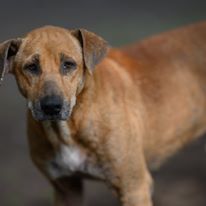 The City's Pound is clean and the dogs are looked after, but such is the problem with strays in Dumaguete that if they are not collected within 3 days, they will be euthanised. Bruce was one of 16 dogs DAS rescued at one go.

He was so antisocial when we brought him to the Sanctuary, forming a mini pack with Alice and Edith – who were also in the same pound rescue.

They always stayed near the Quarantine area, far from other dogs and people. From about Feb to June he wouldn’t come anywhere near anyone. He would bark ferociously and then run away.

Slowly the three of them started to move up towards the kitchen area but he was still very aggressive. He never actually tried to bite but he would lunge at you if you walked to near him.  The only person he would go near was Ding the Caretaker.
Slowly over time he has become more sociable and now he will let people he knows sit close and pet him.

Sadly, it is unlikely he is going to be adopted. He won't go near strangers at all and is already around 10-12 years old. For his age he is actually really healthy and has never had a health problem since he arrived.

Maybe we can get him on a lead soon and take him outside of the Sanctuary for a walk!

This month we have been attempting to leash train Bruce but attempts so far have been unsuccessful! Here he is trying to hide from us when we tried to put him on a leash!

We can't try for long each time as it will traumatise him if we chase him. It took us so long to gain his trust and get him to where he is today, we don't want to break that trust. So we will try and do it slowly.

He is now much more sociable and will sit and let us pet him and also sometimes approach us for attention. But he just does not want to go on a leash. 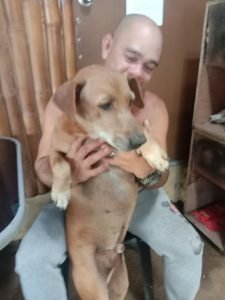 He is now much more sociable and will sit and let us pet him and also sometimes approach us for attention. But he just does not want to go on a leash. He is very attached to our Caretaker Ding - Ding is the only one who can pick him up - though thats not easy as he is around 27 kilos!  Health wise he has had no problems - in fact he is probably one of the healthiest dogs we have as he never gets sick.

UPDATE ON FUNDRAISER - 28th September Since our last update we have received. Gcash 2450 pesos Paypal 110 USD ( 6160) pesos This brings us

Its the end of the day here and its been another good day for Shaun. He's such a trooper! Shaun is only alive and thriving

FUNDRAISER UPDATE 630pm 27th September. Thanks so much to everyone who is supporting us right now! Since our last update we have raised BDO 2000

We had another adoption today!! Little Dolly was adopted by Marson. Thank you Marson for giving Dolly her very own family and home. We are

Please keep a look out for Baymax