You are here: Home / OUR RESCUES / OUR DOGS / BUSTER 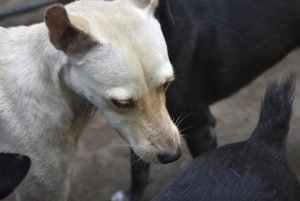 Rescued on 27 March 2022, Buster was rescued from extreme neglect.  Initially very unsettled, he quickly responded to the love and care offered in the Sanctuary, and we hope new, more responsible owners are in his very near future.

Just as we were leaving to pick up Vic, we got a report about an abandoned dog, left tied outside on a rusty chain, with no ability to lie down comfortably, with no food or water.  We went to check on it after picking up Sal and decided we couldn't leave him there. Although it is a criminal offence with up to 2 years imprisonment to abandon a dog or not provide adequate shelter, food and water, conviction rates are chronically low, and cases are notoriously difficult, costly and time-consuming to pursue.

Additionally, dogs in cages and on chains is a common occurrence. We are doing our best to educate and raise awareness of this issue but until we grow much more significantly, legal cases are beyond our scope of operations.
Hopefully in the coming years this will change. Buster tested positive for Erlichia and was covered in ticks.  He was successfully treated, and neutered as all our dogs are once fit enough for the operation.  Initially Buster didn't trust anyone, and after his two weeks quarantine, we released him into the Sanctuary but he started attacking some of the other dogs and also was aggressive to staff.  The only person he likes is our vet assistant Alvin, who began working with him to socialise and train him.  Alvin has worked wonders, and just a few short weeks later Buster is happily running around and seemingly in much friendly spirits.  Given what he has had to endure at the hands of humans, his turnaround is remarkable! Buster after rescue
1 2 Next »

UPDATE ON FUNDRAISER - 28th September Since our last update we have received. Gcash 2450 pesos Paypal 110 USD ( 6160) pesos This brings us

Its the end of the day here and its been another good day for Shaun. He's such a trooper! Shaun is only alive and thriving

FUNDRAISER UPDATE 630pm 27th September. Thanks so much to everyone who is supporting us right now! Since our last update we have raised BDO 2000

We had another adoption today!! Little Dolly was adopted by Marson. Thank you Marson for giving Dolly her very own family and home. We are

Please keep a look out for Baymax