You are here: Home / OUR RESCUES / OUR DOGS / SERENA 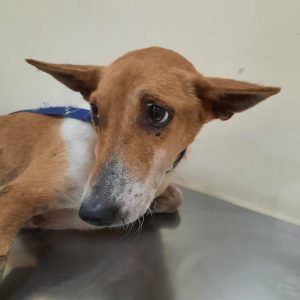 Rescued from a drainage ditch after lying there for a number of days following a traffic accident, Serena had a badly lacerated tail, and broken pelvis.  After treatment, we hope she will recover and find a new home.

On 28 December 2021, we got a call to rescue a dog stuck in a drain so went out immediately to rescue even though the Sanctuary was full.  As our supply of anaesthesia and Distemper tests had run out, and resupply was difficult in the aftermath of Typhoon Odette, we had no option but to take the dog to our friends at Animal Wellness for care. 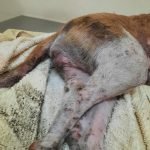 Serena (so named because of her calm and placid demeanor despite her injuries) had a swollen legs, a broken and infected tail, and x-rays later revealed a pelvic fracture.

We think she was hit by a car and fell into a ditch where she remained for at least three days.  She had a raging infection from the tail fracture, so she was put on strong pain killers, anti-inflammatories and antibiotics and kept under observation for a number of days.

She began to stand, eat and drink a little, and even begin to move around, but her infection was still severe.  We became more hopeful when she finally pooped, as that it seemed as if her digestive system was still functioning - without it, her long-term prognosis would be poor.  We decided to proceed with her tail amputation, which may stablise her infection and allow her to recover more fully.  Hopefully, she will soon be on the mend.

Serena before surgery on her tail

We are very grateful for the donations we received for her care, which was considerable, especially at this time of hardship for many people in the Philippines following the devastation wrought by Typhoon Odette (international name Rai) on 16-17 December.

Serena before surgery on her tail

Please keep suki in your thoughts - she is in a critical condition. We really hope the blood transfusion will buy her some time.

Suki is now in a critical state - her platelets are at zero. The only option is a blood transfusion which is not a long

Thank you so much to Kim Kollman for the great article he wrote in the Negros Chronicle! It's great to see DAS getting more recognition

Another dog has just been sponsored bringing our total to 90 out of 128 dogs!! Neo, our first rescue of the year, was unable to