You are here: Home / OUR RESCUES / OUR DOGS / SNOOPY

Snoopy was rescued on 14th Feb 2020 from the local pound death row – he was so aggressive even the pound staff said to leave him there. We can only imagine the kind of life he had led prior to his capture that would make him so aggressive. He had a rusty chain dangling from his neck so probably spent his life tied up somewhere. It took Ding the Caretaker six weeks to get Snoopy's chain off, and no one could get anywhere near him until in April 2020 when we took on new shelter assistant Joel. Within a couple of days he was carrying Snoopy around on his shoulders, although was still aggressive to others.  Joel only stayed a couple of months and after he left, Snoopy reverted back to not allowing anyone near him.  He had a habit of running at visitors and nipping their legs then running off!

When Doc Riv joined the shelter in May 2020, he said Snoopy needed to be socialised and kept in quarantine until he was more friendly.  As soon as we put him in the kennel, he turned into the sweetest boy, wagging his tail and licking us. So we let him out. And he went back to being the same way! When our new vet assistant Rudylyn came – he took to her the same way he took to Joel and slowly he is getting better – though sometimes out of the blue he will charge at a person, nip them and run off!

We love him dearly though – he is such a character.
He is a healthy dog and has had no illnesses since he came to the shelter.  Snoopy likes to try and get out of the shelter – he is able to climb a tree that he could jump from over the fence! We had to raise the fence because of this.

He has a girlfriend Sheila – they are always together!

Sheila is also unsociable – not aggressive just won't allow anyone to touch her. She was also a pound rescue.

Snoopy and Sheila reunited
1 2 Next »

...from the life of the Sanctuary from a dog's eye-view. Sheila (white, left) has just been disturbed from her comfortable dirt-hole by Indy (black, right). Bystander Jenna (black with white chest) looks on worriedly, while Snoopy (scruffy, background) knows well enough to stay out of it when the ladies begin to argue.....Sheila eventually got her hole back. Snoopy got Erlichia this month, which is a bacterial infection caused by ticks. Unfortunately even if we use anti-tick medication on the dogs it doesn’t prevent the ticks from biting - it just prevents them burrowing into their skin.
Erlichia can be fatal if untreated and so it’s vital that we catch the signs early, which are lethargy, loss of appetite and low platelet count. 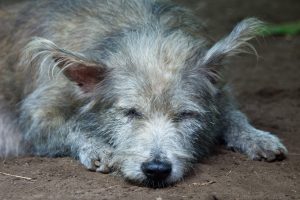 Snoopy is normally active so when he became lethargic we ran blood tests and confirmed Erlichia.
He is now on antibiotics for three weeks and then we will test his blood again.

The video here was from earlier in the month, but he is much better now and getting back to his usual naughty self.
He has also made up with his girlfriend Sheila, and they are back together again! The big news this month is that he and his girlfriend Sheila seem to have split up. They have been side by side for months, always sleeping next to each other and following each other around then suddenly around 10 days ago, they were at opposite ends of the shelter and now are never together.

We have no idea what happened!

He has also been up to his usual antics of biting people when they come to the shelter.

He doesn’t seem to bite women but frequently charges out of nowhere and nips at mens' ankles!  He is terrorizing our new vet!