On 13 April 2022 our Shelter Manager Rina's sister Gabbi came upon this poor puppy lying paralysed in a field.
This is a constant dilemma for us, when we hear of a dog in critical condition, yet we are already over capacity.
Of course we brought her in. She appears to have been hit over the head. We called her Amber, and put her on heavy pain medications and anti-inflammatory drugs. 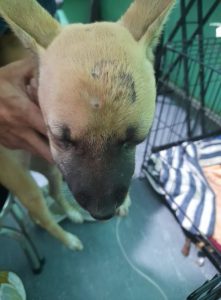 During the night, Amber stopped breathing but due to the vigilance and skill of our night vet assistants, Adrian and Carl, they were able to resuscitate her and save her life. Later the next day she stood up and positioned herself for a wee and then gave a little bark, and was taking in a little food, but the following night the vet assistants called Rina to go to the Sanctuary at 6am as Amber had started to have cycling seizures. These are where the dog keeps making cycling movements with their legs - a common result of Traumatic Brain Injury. We know there is no coming back from this and the only kind thing to do was to put Amber to sleep. Rina called Pierre at 7am to come up to the shelter, but 10 mins after that, Amber stopped breathing.
Amber died because of another case of human cruelty. We have no idea who did it as we just found her lying in a field.
Run free little one - we are so sorry you had to endure such pain and cruelty in your very short life.