We had another great day at Robinson's Mall Dumaguete! Thank you to everyone that came out to visit, donate and adopt!
We received a lot of in-kind and cash donations and we had 4 puppies adopted!  Aileen and family adopted Darla, Carl adopted Dixie, Riza and family adopted Padme and Marvin and Andrew adopted Arwen!  It was Darla's second adoption as she sadly had to be given up by her original adopters as a young member of the family proved to be allergic to her.  We hope it's second time lucky for her! Padme adopted by Riza and family Arwen adopted by Marvin and Andrew Darla adopted by Aileen and family Little Arwen passed away last night.  We don't know exactly why as her blood tests didn't indicate any real concern. It was a pretty normal profile for a new rescue.
But she was riddled with worms, so even though we dewormed her immediately on rescue, worms often cause a lot if damage to organs. 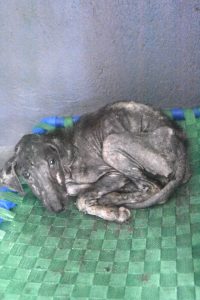 It's so sad as Kate and Paolo of ECE Were going to adopt her when she was well.  So sorry Arwen that we couldn't save you, we tried our best but we were too late.  You can read Arwen's full story here. Harvey around at the shelter around 9pm last night. Rina, Rachelle and Angel give him an initial assessment and put him on IV as he

This is the wonderful human being who fought so hard for Harvey to be rescued. He looked after him for five days and gave him

We are currently waiting for Harvey to arrive. Rina is staying late so she can do preliminary tests, distemper, CBC, full blood Chem, 4 dx

The hit and run we posted about earlier is on his way to the sanctuary. It literally took a village to get him rescued and

urgent plea for help!! We dont rescue outside of Dumaguete and surrounding areas as there are so many here that need help - we can't