Franze in his new home!

Franz, now called Wyn Wyn, is enjoying being back in his old neighborhood without the massive tumor he carried around for about 8 years. We are delighted that Wyn Wyn gets the happy ending that he deserves. 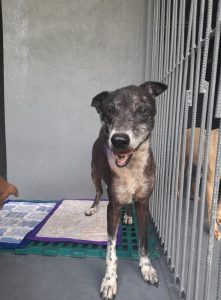 Franze has been adopted!   He is the very old dog who had a huge tumor hanging from his neck. We initially thought he was a stray but after rescuing him, we found out he had an owner who couldn't afford the treatment. Plus Franze lived in a very rural area around 40km from the nearest vet.
We were going to keep Franze at the shelter but like many old dogs, he spent all his time pacing up and down the fence trying to get out.
It's only a matter of time before dogs who do this, escape.
We decided he would be safer and much happier back in the place where he spent all of his life, so we asked if anyone who knew him would take care of him. A lady called Sheila, from Franze's village messaged us and offered to adopt him. She already knows him and he was really happy to see her.  We're sure you will be much happier now Franz!  We will keep in touch with Sheila and help out with any further health issues.
Franze is neutered, vaccinated and dewormed.  You can read more about Star's miraculous recovery on her profile page here.