Mickey was reported to us on 10 March 2022 in Pamplona, around 2 hours away. We normally restrict rescues to our surrounding area but this poor boy we couldn't say no. Estella and Paul drove up there but couldn't locate the dog but returned the next day after practically the whole village went out to look for him and contained him. 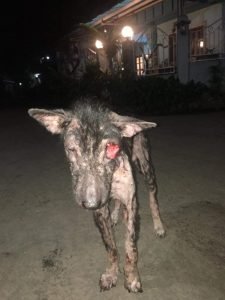 He had multiple tumours and clearly had TVT, which is very treatable. He was old, had mange, and was malnourished, but we had hope. Within a couple of chemo treatments, his tumours began to subside, and he began to enjoy his surroundings, and the care and attention he was receiving from staff. On 20 April around 3pm, he collapsed and we immediately brought him to the clinic and put him on IV and oxygen. His multiple mast cell tumours were being destroyed by the chemo but as they were being broken down, they released toxins into the body that can often be fatal. We knew this was a possibility and bought all the medication that can help him to process the toxins but it's never a guarantee that a dog will survive. It was heart-breaking to see this boy fight for his life after all he's suffered, wandering the streets with tumours all over his body and in his eyes. At least his eyes were now clear.

Despite all our efforts, Mickey passed away at 11:10 on 25 April 2022. He just wasn't able to process the toxins from the breaking down of the tumours. We take comfort in the fact that up until his rapid deterioration, he was eating, sunbathing, going for walks and getting a lot of love from the staff.
Thank you to everyone who donated for his care, to his sponsor Kirsty, to everyone who held him in their thoughts.  And thank you to our amazing staff who stayed round the clock to try to give him the best chance of survival. We are so heartbroken to lose you mickey. Rest in peace beautiful boy.