Abandoned by his owners who returned to Manila, Shaggy, as his reporter named him, was picked up on 29 April 2021.

As well as being left behind, he also had an infection which we treated with antibiotics.

He was antisocial, bordering on aggressive when he arrived and was clearly disorientated and confused as to what had happened to him. His coat was so matted, we had to take the clippers to him, and after a bath, and after receiving his vaccinations and getting neutered, he spent a few days in Quarantine adapting to his new surroundings.

He took a few days to adjust, and Doc Pierre was one of the first to make friends.

His bestie Miles was in Quarantine at the same time, and they helped eachother become more sociable with humans and the other dogs.

In early June, we started to notice he was not his usual self.  He had been rescued just before the first few Sanctuary dogs started to display signs of Canine Distemper bought in from outside the Sanctuary (find out more here), and he was displaying some early signs of the virus.

Very quickly, the neurological aspects of Distemper became apparent, with twitching muscle spasms in his head, the loss of the use of his back legs, and regular seizures.  We took him into the office for close observation, put him on an IV as he had stopped eating and drinking, and send blood samples to the clinic for more information, as we suspected a secondary problem.  Sure enough, he was also suffering from acute Pancreatitis, but with the help of the IV and the magic of local honey to help his blood sugar levels, he seemed to be shaking off the Pancreatitis. 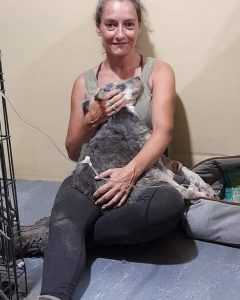 Shaggy being cared for in the office

One of our volunteers Pati visited him often, hoping some Reiki healing would help, and we took shifts holding him through the day, which seemed to calm him, and spending the night sleeping in the office to watch over him, willing him to pull through.  His medication was helping with the pain, and on 15 June, he seemed to rally, opening his eyes and swallowing liquid from a syringe.  We hoped that these were the first signs of a recovery, but sadly, Shaggy passed away the following afternoon, 16 June 2021. We gave him the very best care and every possible medication. Our vets tried everything and we stayed with him pretty much 24 / 7 over the last few days.  The distemper had caused irreversible brain damage and there really was nothing more we could have done.  Its a cliche to say that he was loved - but it is so very true.  Shaggy even had a home waiting for him. Lito, the person who rescued him had found him a home with his sister in Manila. We were just about to organise transport when he got sick.

Its so very hard to love these souls and then to watch them go - but we have to focus on the joy that they brought to us and us to them.