Vee's story is bitter-sweet.  A victim of a hit-and-run around the beginning of October 2022, Vee had fallen into a canal by the road. A 16-year old by named Jermane had been asking around for help to get it out but no one would help. He had been feeding the dog for the last few days and reporting to us - we were really hoping someone would help as it is hours away from us, and we have so many to look out for in our immediate area. It was heart-warming to see so many people step forward to help, particularly Jermane Andrew who stayed with the dog for five days, talking to him, feeding him and giving him water and to Olga Uy for making the whole rescue happen.

It literally took the whole village to get Harvey to us.  Joelito and June Vida Baco volunteered to bring Harvey back to the Sanctuary and paid someone small enough to crawl into the culvert to get Harvey out. Michelle Marie Bolongaita and Evimei Acas-Reyes also responded immediately and helped by forwarding Olga Uy's messages to the barangay officials of Palaslan, Tayasan, led by Brgy. Capt. Engelbert Torres and assisted by Kagawad Jose Je Alvarico, Tanod Gember Ceriaco, Ranie Tabanao, and Alan Gamboa. Joelito's young nephew, Idol Baco, helped by alerting Tayasan MDRRMO and exerting efforts to reach Jermane during that time when he couldn't be contacted. We are so grateful for everyone's help. Jermane had named the dog Harvey, but once at the Sanctuary, we discovered he was a she, so shortened her name to Vee.  It was 7.30pm before she arrived, and we made her as comfortable as possible until the morning when she could be transferred to Animal Wellness to get x-rays and more detailed assessment. 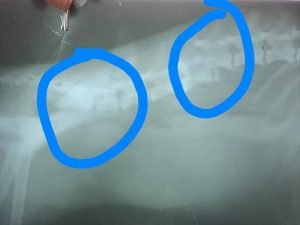 It was the worst news possible.  With two complete spinal fractures with extensive nerve damage, so she had no prospect of ever being able to pass waste on her own.

There is no treatment for this so we had to make the decision to put her to sleep.  We notified everyone who was involved in her rescue and spoken to Jermane who was devastated.  At the very least, she wasn't left to die a slow painful death alone. If we can't save them, at least we can free them from suffering.  RIP Vee - people cared.